bunnysworld
Title: Caught
Rating: PG
Pairing(s): Arthur/Merlin
Summary: Arthur does something in class that he shouldn’t do
Warnings: fluff?
Word Count: 811
Prompt: Red – use Paint
Author's Notes: Wrote you a drabble to distract from the fact that I suck at drawing and that I hate Paint

„If you stopped drawing little hearts on a photo of your class mate and for once paid attention to this class, Mr. Pendragon, your grades might even get into the range of acceptable.”

Arthur jumped and blushed right away, trying to put an arm over the photo that he’d stuck to his notes with a paper clip, but it was too late. Obviously Dr. Miller had already seen it. Around him, he heard his classmates’ whispers of “Who is it?” and tried to shrink further into his seat.

He was so ashamed that he had been caught that he didn’t pay attention for one second. The second that it took Gwaine to snatch the photo from him. 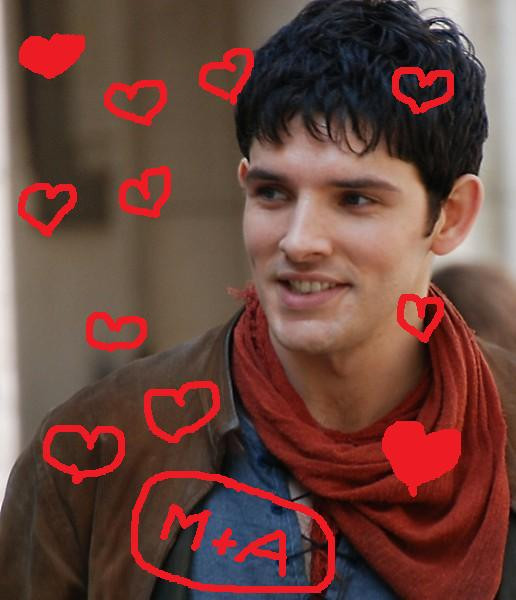 Now Arthur paled. And blushed even more. At the same time. If that was possible. Where was that hole in the floor when you needed it? Not only that Dr. Leon Miller, best physics teacher of all times, had caught him doing anything but paying attention, no, Gwaine and his big mouth had outed him not even two minutes later.

On top of it…there was no ‘you and him’. Oh, how he wished there was a ‘you and him’. For weeks he’d neglected everything in favor of dreaming of his class mate. The vibrant blue eyes, the thick black hair, the full lips, the beautiful smile, the stupid red neckerchief he was so fond of, the old worn leather jacket, the….damn, and now everyone knew. And he knew, too! Couldn’t Gwaine stop waving the photo about? Arthur just wanted to die.

He was saved by the bell and just grabbed his things and fled the room, leaving the photo behind. He had it on his computer, he could print it out as often as he wanted.

For the rest of the day, he kept his head down, wearing his aviators whenever he had to leave the building to switch classes, hid in the bathroom and practically felt the collective stare of the whole school when he walked down a corridor. The whispers were hard to miss. There was everything from surprise that one of the most popular guys in school was gay (and a good amount of disgust at that, too) to lack of understanding why he seemed to be in love with one of the most nerdy blokes in school.

He was glad when classes were over and he could go home. As he walked to his car, deliberately not looking at anyone, he jumped yet again when he noticed someone stepping up to him. Who had yet another comment to make? Or was it one of those gay bashing guys from the team? And he was in for a pounding? He was so drained that he couldn’t care less.

“What?” he snapped and turned. Only to be faced with the object of his affection. Arthur felt the heat returning to his cheeks.

“Err…hi,” Merlin shuffled his feet and pressed his notepad against his chest, holding something out to Arthur. “I thought…I dunno…maybe…maybe you wanted this back.” There was an endearing flush on Merlin’s cheeks and Arthur couldn’t help but stare.

Then he looked at what Merlin was holding out. Oh dear Goddess, it was the photo Gwaine had snatched from him. Now Merlin had seen what he had been doing and it was pretty obvious why he’d done it.

Before he could babble on, Merlin smiled one of those wonderful smiles. “Don’t worry, I…,” he opened his notepad and held it out to Arthur. “This is what I did in class.” 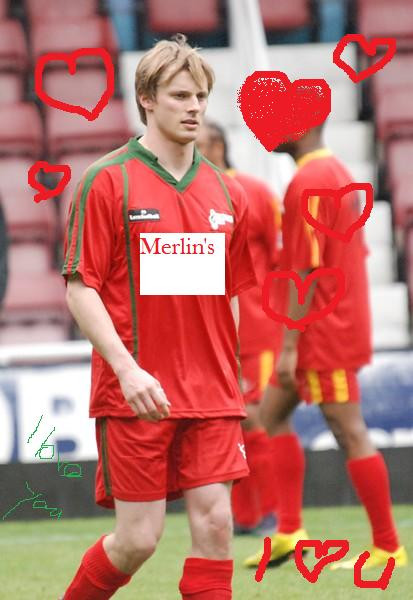 Arthur stared as Merlin chuckled “But at least Dr. Miller didn’t catch me.”

The other boy shrugged and gave him a wry smile. “Yeah?”

Arthur let out a dry laugh. “Either we open a club where we learn to draw…”

How came that Merlin was so close all of a sudden? Arthur stopped thinking. His world was upside down after today anyway, what harm could one more thing do? He leaned in and brushed his lips against Merlin’s.

Merlin dropped his notepad and wrapped his arms around Arthur’s waist and giggled breathlessly before returning and deepening the kiss.

They broke for air a moment later when Dr. Miller walked by and loudly wished them a nice weekend.

Was that a smirk on the teacher’s face?

Arthur turned back to Merlin. “Pizza and a movie tonight?”

Merlin smiled widely and nodded. “Can we make that pizza and a DVD? I have to babysit my uncle’s puppy tonight.”

A quick peck on the lips later, Merlin was gone.

On the way home, Arthur pondered sending Dr. Miller a thank you note.