Fic: The Proposal from Gwaine Merlin Never Should Have Accepted

inspired_being for the beta and keeping my run-on sentences and comma-infested punctuation under control.  Set between Season 3 and 4. I wanted to write something other than a 'marriage' proposal.

"But I don't understand why. You don't need to drink--just come along for the company."

“That's not what you tell me when we are there." Merlin responded with a chuckle. In his best Gwaine voice, Merlin imitated, "C’mon Merlin, one drink won't hurt you. And before you know it, I've downed two or three."

"Not my fault you’re a lightweight where ale is concerned and can't limit yourself to just one," Gwaine grumbled.

"Arthur is already unhappy about how often I'm at the tavern and I have to get up early tomorrow to get Arthur ready for the Beltane rituals that start at dawn."

"How often you're at the tavern? But you never--."

Merlin cut him off, shaking his head.  "Never mind, it's a long story."

A glint came to Gwaine's eye as he said, "I have a proposal for you, Merlin. I think I know how to make this work out for everyone."
ooOoo
As Merlin finished his second ale, he shook his head. How did I let Gwaine talk me into this? Well, at least he seems to be holding his liquor better than I am. Considering the amount he drinks, he certainly has a tolerance for it, unlike me.  At least I've enlisted Percival to ensure Gwaine holds up his end of the bargain. I can trust Percival, especially where Arthur is concerned.

Merlin motioned for another refill, smiling to himself in anticipation of a well-deserved lay in tomorrow morning.
ooOoo
"Princess! Time to wakie-wakie!"

It was quite dark in Arthur's quarters since Gwaine had failed to bring a candle with him. So it wasn't surprising Gwaine stumbled over Arthur's boots, which were strewn over the floor, and toppled onto Arthur's bed.

Arthur didn't respond well to the large weight deposited on him, rousing abruptly from a very pleasant dream.  "Wha'? Who? Get the hell off me!"

Arthur had managed to push Gwaine on to the floor. Then he reached for his sword; always kept handy at his bedside. Gwaine was pulling on the bed coverings from the floor, trying to gain purchase and become upright again, all the while shouting, "Arthur!" and "Princess!" alternately. 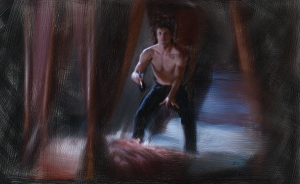 Arthur meanwhile had taken the position of standing on his bed and brandishing his sword, while yelling "Guards!"
Percival burst into the room just in time to see Arthur lose his footing as Gwaine tugged the bed coverings, pulling them completely from under the prince's feet. "Sire, it’s just Gwaine," he explained.

"Gwaine?  What the hell is going on?" demanded a bleary-eyed and puzzled Arthur, motioning threateningly at Gwaine with his sword.

Gwaine exclaimed brightly, "You're awake now, aren't you? Time to get you ready for the rituals."

Percival tried to help by offering, "Merlin agreed to join us at the tavern last night, if Gwaine would take over waking you up this morning."