Up in the Air

destiny_chicken
Title: Up in the Air
Rating: R
Pairing/s: Arthur/Merlin
Character/s: Arthur, Merlin
Summary: Merlin and Arthur's flight is delayed.
Warnings: Slash (not explicit)
Word Count: 234
Prompt: #58 Annoucement
Author's Notes:  I had no workable idea for this week's prompt, until my own flight was delayed. Trust me I had nothing nearly as diverting as Artthur and Merlin did to pass the time. If you aren't familiar with "The Mile High Club" see the Wikipedia entry here (http://en.wikipedia.org/wiki/Mile_high_club ). Thanks to

inspired_being for the beta, as usual.

"We're sorry to announce that Flight 58 to New York is delayed an additional hour," blared the PA system at the gate.
Arthur raised an eyebrow, looked at Merlin and sighed. "Another bloody hour of waiting. I've about run out of patience for sitting here doing nothing." 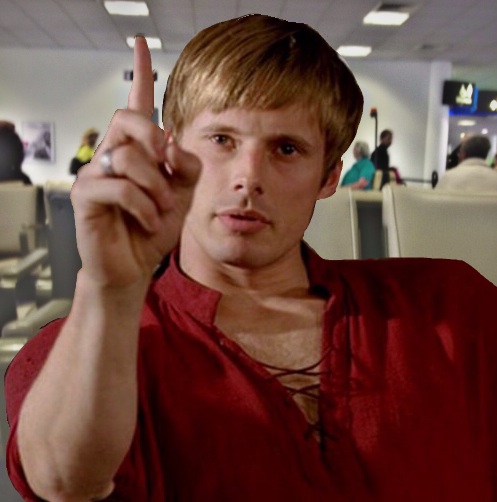 "What about starting to read the best-seller you bought in the bookshop?" Merlin suggested.
"No, I'm saving that for the trip."
Merlin narrowed his eyes at Arthur.  "What?  This is the trip we've been planning for months."
Arthur pointed his finger skyward. "No, you idiot.  Up in the air.  I'm going to read it during the flight, not here waiting."
Arthur started drumming his fingers on his knees. After a minute or so, Merlin restrained Arthur's hands with his own.  "Stop that.  If you are so bored and tired of waiting, I have a suggestion." He licked his lips slowly, making sure Arthur's eyes were focused on his face.
A broad smile slowly grew across Merlin's face as he continued, "I was going to wait until we were up in the air to suggest this, but since you need some entertainment... How about we get in some practice on the ground for joining the 'Mile High Club'?" He motioned with his head towards the nearby restroom.
Arthur grinned. "Practicing, eh? I like the way your mind works.  For this, I'll suspend my 'only up in the air' rule!"
Tags: *c:destiny_chicken, c:arthur, c:merlin, p:arthur/merlin, pt 058:announcement, rating:r, type:drabble
Subscribe